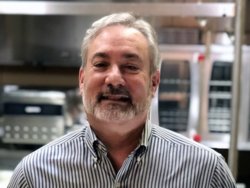 Howard enjoys working with end-users and distributors alike.  He is married, has two daughters, and enjoys watching and playing sports, spending time with friends and watching his daughters grow up.